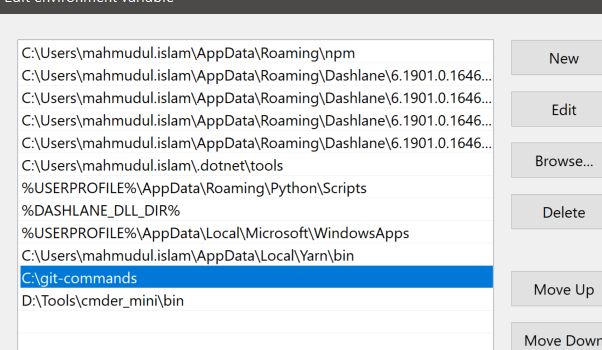 Well, if you are lazy as me, or nearly as lazy as me, you must be bored how much steps you have to follow to setup a nice little git commit template to auto populate your ticket number in front and ask for a commit message all the time.

Before, we continue, let us know about a cool feature of git. In git, you can add a custom command pretty easily. For example, say you want to be able to execute git blah. Well, the implementation is pretty easy, all you need to do is create a file named git-blah without any extension, make it executable. e.g. chmod +x /usr/bin/git-blah and place it in your $PATH variable. Git looks for custom commands in your path and automatically makes them available to you. This works for Windows as well, but you probably don’t need to run the chmodfor the windows.

Well, I did the same thing –

I have uploaded the commands to github. So, that someone else lazy as me, stays lazy as me. 😉

Make sure this command is available to git

The symlink in windows –

The commit message template only works properly with branch naming that follows as hotfix/XXX-999, feature/XXX-999, warmfix/XXX-999, etc formats. You can modify the format if you need. Just edit the code inside the pre-commit-msg file.

See it in action

In addition from the next commit you will see a fancy prefix from your branch ticket number auto added.

This site uses Akismet to reduce spam. Learn how your comment data is processed.